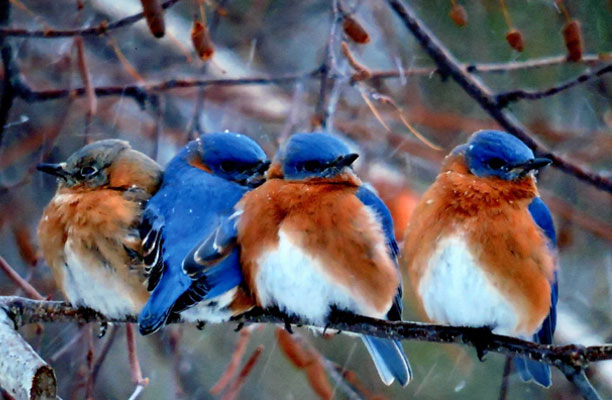 Bluebirds, members of the Thrush family, are a popular, beloved, and welcomed site in gardens, both for their brilliant plumage and fondness for feasting on insects to help keep pests at bay. Native only to North America, there are three species, Eastern, Western, and Mountain, with similarities and differences based on region.

Bluebird Migration
The Eastern bluebird is the most widespread of the three types. As suggested, this species is more prevalent in the eastern United States with a range extending west to the Rocky Mountains.

Although it is mostly a year-round resident, during winter Eastern bluebirds may fly short distances south or remain in their breeding territory year-round.

Where the eastern range ends, the western picks up extending from the Rockies to the Pacific coast. Some Western bluebirds may travel as far north as British Columbia. Those in areas with mountains may fly to warmer elevations down the slope. Keep watch as bluebirds tend to migrate during the day.

The third bluebird species can be found throughout the Rockies and other mountains of the west and have been observed at elevations up to 12,500 ft during the breeding season. Migrating flocks of 20-200 Mountain bluebirds travel short to medium distances during migration. They may travel as far north as Alaska for breeding and winter in central Mexico. This species is more likely to be spotted out of its range than the other two.

Traits of the Eastern Bluebird

Appearance – Male Eastern bluebirds boast vibrant, deep blue backs, wings, and heads with orange breasts with an orange throat. They have white bellies and a slightly larger bill than the other two species. Blue tinges in the wings and tail give the grayer females an elegant look. Weighing in at about one ounce and ranging in length from 6.3-8.3” with a wingspan of 9.8-12.6”, they can reach speeds of up to 17mph when in flight.

Female Eastern bluebirds display more muted bluish-gray colors along their backs and heads with tinges of blue on their wings and tail for a subtle yet elegant look. They have white throats with faded orange breasts, continuing onto the sides of the neck. Click here to view the beautiful colors while listening to an Eastern bluebird singing.

Habitat– Eastern bluebirds live in places with an open canopy such as meadows, pastures, semi-open woodlands or large mowed lawns. They prefer clear cut forests and live along the forest edge. They also enjoy perching on fences, telephone poles or medium sized trees.

Diet – 68% of a bluebird’s diet consists of insects such as crickets, spiders, grasshoppers and caterpillars. Perching on fences or low tree branches allows them to swoop down and hover to collect their treat or use a “hawking” technique of catching their prey in the air. Offering mealworms in your feeder is an excellent way to attract these beauties as they are not fond of standard bird seed mixes. When bugs become scarce in winter, their diet switches to berries such as juniper, and fruit. On occasional they will eat suet, peanut pieces, raisins, currants, or grapes.

Traits of the Western Bluebird

Appearance – Like their Eastern counterparts, Western bluebirds have bright, deep blue backs and wings. Western males have a blue throat. Females are gray buff with an orange wash over their breasts and tinges of blue to the wings and tail. The lower belly on both sexes is grayish-blue. They are sparrow sized with an average weight of about one ounce and a length of 6.3-7.5”. Their wingspan is slightly longer than the Eastern variety at 11.4-13.4”.

Habitat – Western bluebirds also tend to live in open woodlands, often in trees grounded by fires or logging, although they are less frequently seen. Their established areas are more prone to host ponderosa pines, conifers, junipers or aspens. They stay low to the ground to swoop down on unsuspecting insect.

Diet – Similar to the Eastern, the Western bluebird fuels eats mainly insects during warmer months. During winter its diet is supplemented with berries of juniper, poison oak, elderberry, raspberries and blackberries. They have been sited catching marine invertebrates along beaches, too.

Traits of the Mountain Bluebird

Appearance – Compared to other bluebirds, the Mountain variety is lankier with long wings and a long tail. The male is sky blue all over with slighter darker coloring on the wings and top of the tail and white under the tail. Females are gray-brown with hints of pale blue in the wings and tail and a tinge of orange-brown on the chest. Their wingspan covers 11-14.2” with a body length is 6.3-7.9” and a weight of 1.1oz.

Habitat – Observed at elevations up to 12,500 ft during breeding season, gravitating towards open areas such as pastures and meadows as well as heavily wooded spaces or recently burned vegetation. During winter they will fly to lower elevations. Unlike other varieties, they are not deterred by nesting boxes built by their followers since nesting cavities are in high demand with competition from other species like Starlings, Sparrows, and Wrens.

Click here for step by step instructions to build your own bluebird nesting box.

Diet – The Mountain bluebirds follow a diet similar to other species. Beetles, grasshoppers, and caterpillars are top favorites. They will forage on various berries and fruit such as grapes, currants, and cedar along with seeds from sumac, mistletoe and hackberry.

Tips of How to Attract Bluebirds to Your Yard or Garden

Attracting bluebirds to your garden or yard may seem like a challenge. Try these helpful tips and you’ll soon be enjoying dots of brilliant blue visiting your feeder.

For great feeders bluebirds are sure to love, check out these products from the Mosaic Birds collection:

Bluebirds are considered harbingers of Spring and have been featured in popular songs and books such as “Somewhere Over the Rainbow” and the fairy tale “The Blue Bird” about the Bluebird of Happiness. They are also voracious insect eaters which is a welcomed attribute for gardeners seeking to grow low maintenance, pesticide free, quality produce, herbs or flowers. Display a nesting box, or two, around your property, offer bluebird specific foods like high protein mealworms, and watch for happy feathered friends to reward you with their brilliant beauty.